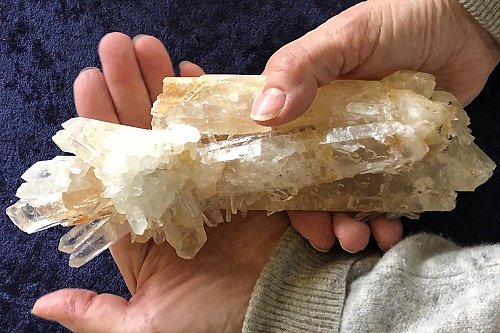 When we get help from any healing profession, there is only one goal: Support the self-healing process. For example:

Self-Healed crystals are quite hard to come by. It’s a paradox, because in one way, they aren’t that rare and yet well-balanced, nicely formed self-healed crystals that make good healing tools are rare. I think it’s the match between the crystal and the person – same as finding your significant other. There are lots of people out there – people aren’t rare – but the person who is right for you – well, that’s another story.

Yet, on our recent trip to the Tucson Gem Show, we found a lovely supply of gorgeously formed self-healed beauties. The timing couldn’t be better! The whole world is trying to heal itself after the extremely difficult challenges of the past few years. Anyway, I decided to interview some of the self-healed crystals that we brought home from the Tucson Gem Show and find out what they want to say. Or perhaps I’m saying it wrong – these beauties told me that they want to deliver their messages at the next opportunity.

First is the Colombian Golden Healer: This is one outstanding crystal! I was done shopping mainly because I added up how much money we had spent on new inventory and we were 25% over the usual, and I figured: “It’s time to stop.” Then we went down to a show location that had been slow in setting up – the show at Kino Electric Park. We went into the main exhibition hall and the atmosphere was kind of “grey.” Usually this is a lively, buzzing venue full of color. Not this year. So many vendors were missing, unable to attend. Even as booths were being set up, there was a feeling of emptiness. This particular exhibition hall can take the better part of a day to work, but we only needed an hour. There was only one booth that attracted my eye, a booth selling the new and very exciting Plasma Quartz – the very clear, high vibration quartz that is currently coming out of Colombia. I’d already bought loads of Brazilian Quartz (and I mean loads) and I’d already spent enough money, and I wasn’t in the mood to spend any more but … I could not resist this one self-healed crystal. It has a strong body with numerous new growths all over it – new terminations, barnacles and even clusters that look like starbursts. Not only that, the body of the crystal is gold – this is a self-healed golden healer. This unusual crystal combines 2 temperaments that are usually mutually exclusive – it is calm and serene AND it is bursting with energy. What this new teacher has to say is simple, and poignant, here it is: “It is very important to come back from grief and despair and not just wither away.”

What can I say to that, other than: “There it is. How true, and now, how shall I come back?”

Second is a most unusual crystal that broke, and then self-healed with a gap between the termination and the rest of body, with a small crystal bridge holding the pieces together, and on the other end, at the base is a healthy set of well-formed terminations: This crystal reminds us that “what doesn’t kill us makes us stronger.” And it’s saying: “Not just “stronger” like reinforced, stronger like qualitatively different, new, better, with added capacities, and added talents.

Third is the Curved Self-Healed Crystal: This is the sweetest self-healed crystal ever. It is about 8-9 inches long, a curved body, and new, self-healed points on both ends. This crystal, with its graceful curve says: “We need to learn how to bend to circumstance and yet continue our journey, not in a depressed way, but with a surge of new energy. So what if our path has changed? Look around you and choose one of the new opportunities.”

Hmmm, much-needed wisdom from the mineral kingdom. How wonderful to receive such focused messages during these changes. Thank you, Mineral Kingdom, for your loving support. Your jewels are not the only precious gems, your messages are too!

Thank you! You have been listening to Viv and Neil of the Schapera Show, broadcast at 9am PT on the second Friday of the month, and then available on demand. Join us, to enjoy this big adventure called Life.

Self Healed Base Quartz Crystals – These are crystals that during their growth cycle – have been broken off from their matrix. They self heal their bottoms in either crystalline form, or they develop etched bottoms. Both are easy to recognize as clearly the bottom of the crystal does not have a snapped or clean broken look about them.

Self Healed Termination/Face Quartz Crystals – These crystals have either had their termination, or just a face or two of their terminations damaged. Once again the crystals either heal themselves with a crystalline (sometimes druzy) finish, or a smoothed off, yet etched finish.