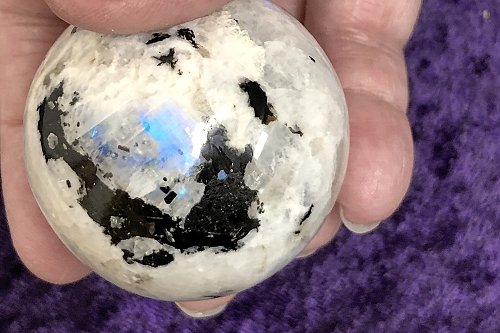 Who Brings out the Best in You?

Who is the Light of Your Life?

Chatoyancy refers to the way some stones shine in the light, very similar to the shine on silk. Adularescence is described as a milky, bluish sheen that is also like a glow of light. And, as you move the stone, the glow seems to follow the light.

What’s so compelling about Moonstone, is that the blue seems to emanate from inside the stone, as though there is an otherworldly light shining out at us from another dimension. And it is specifically this blue, glowing light that earned Moonstone its name – because it is so reminiscent of our closest “other world” that shines down upon us – the moon!

Like the moon, Moonstone can affect the water in our bodies. Consequently, it helps us with matters related to fluid balance – like dehydration, water retention, and swelling. Moonstone also has a positive effect on women’s hormonal levels and can help women with everything to do with a healthy hormonal balance. When pregnant, Moonstone encourages balance and when going through menopause, likewise. I will go so far as to say that all women should have a healthy supply of Moonstone jewelry – rings, necklaces, earrings and pendants – to see them through all the hormonal cycles of life.

But here’s the important part – the glow isn’t following the light. The adularescence only exists in the presence of light; it is a product of the interaction between light and the internal microstructures of the mineral and not a property of the mineral itself.

In other words, this compelling, and extremely beautiful blue light in Moonstone is NOT a property of the stone itself. Without LIGHT there is no blue sheen. The adularescence “is a product of the interaction between light and the internal microstructures of the mineral.” https://en.wikipedia.org/wiki/Adularescence

Today, Moonstone is asking us to consider some very important truths about ourselves. Firstly, Moonstone is asking those who know it, to revisit the parable about the talents. Essentially 3 servants were each allocated some money – called talents – and told by their master to use their talents well. There are different versions and interpretations of the parable, and Moonstone doesn’t care which one you select to pay attention to. Moonstone’s three main points are:

Let’s remember that adularescence only exists when light interacts with the microstructure of the stone. But Moonstone doesn’t only want us to think of light as “light,” Moonstone wants us to think of “light” as “energy.” Moonstone says that light is important to all life forms in a range of ways and that’s a given. We don’t need to discuss that today.

Today, we’re discussing the interactive energy that will create the adularescence — the inner magical glow – in each of us and Moonstone says: That energy, for humans, is other humans.

Moonstone wants us to identify, each for ourselves, who are the people in our lives that cause us to glow, bring out our creativity, encourage us to show our talents. Moonstone points out that we even have the expression: “So-and-so is the light of my life.” Moonstones says: “Get more of that in your life and you will be happier, healthier, wealthier and wiser. And everyone around you will benefit too.”

– what talent or interest do you have that only emerges in response to the light of others?

And what light do you shine, that allows others to exhibit properties that only exist when interacting with your light?

Chatoyancy is:
The effect can be likened to the sheen off a spool of silk: The luminous streak of reflected light is always perpendicular to the direction of the fibres. For a gemstone to show this effect best it must be cut en cabochon (rounded with a flat base rather than faceted), with the fibres or fibrous structures parallel to the base of the finished gem. The best finished specimens show a single sharply defined band of light that moves across the stone when it is rotated. Chatoyant stones of lesser quality display a banded effect as is typical with cat’s-eye varieties of quartz.

Adularescence is:
The effect of adularescence, also commonly referred to as schiller or shiller, is best described as a milky, bluish luster or glow originating from below the surface of the gemstone. The schiller, appearing to move as the stone is turned (or as the light source is moved), gives the impression of lunar light floating on water (accounting for moonstone’s name).[1] Though white schiller is the most common, in rarer specimens, orange or blue lusters are produced.[2]

This effect is most typically produced by adularia, a K-feldspar or orthoclase (KAlSi3O8), from which the name derives.[3][4][5] Adularescence appears in numerous other gemstones, notably common opal, rose quartz and agate. However, due to inclusions in these other stones, the effect is displayed differently. The schiller is scattered by inclusions and appears hazy; non-hazy specimens are specially referred to as “milky”. Thus, adularescence occurring in non-adularia gemstones is termed differently – the “girasol effect” and opalescence (for opals only) are two such terms. When the schiller forms an indistinct band, it is said to display a chatoyant effect. Only clearly defined bands are referred to as “cat’s eyes”.[5]

As an optical phenomenon, adularescence exists only in the presence of light; it is a product of the interaction between light and the internal microstructures of the mineral and not a property of the mineral itself. The effect is produced by alternating layers of two types at a scale near the wavelength of light (approximately 0.5 micron) – this leads to light scattering and interference