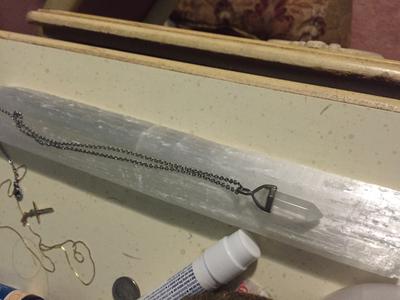 I am currently a junior in high school. When I was 12 a medium told me I was psychic, up until that point I just thought I was sensitive to energies. As I have gotten older those abilities have gotten stronger. I think my major awakening happened from last fall until now. I never knew the technical term for sensing others energies until last fall when I discovered I was an empath.

I had lots of stress and negativity in my life last year as well. I have also always had anxiety which later turned into depression which is on and off. I first learned about the healing properties of quartz when I was watching “long island medium” and from the day I have always wanted a pendant.

That was a few years ago but I recently came across someone selling crystal pendants and so I bought a crystal quartz pendant for myself and my best friend. I also purchased a wand of selenite. I have worn the pendant everyday since mid-July. I love to wear it and feel comforted by its energy. However it likes to “take walks” when I take it off to shower.

I once lost it for two weeks even though I had known exactly where I left it. It was after someone said to focus on the energy and I got nothing. I had to take my hamper down stairs for laundry and boom there it is laid out in a perfect line. I have been wanting to get more crystals.

Lately “past three nights” I have been waking up very early and although I only checked the time once I think it was the same hour each night. Its so frustrating as I need to get enough sleep for school and because no matter what I do I cannot fall back asleep. Also the first two nights of this happening I had very unsettling dreams which when I awoke left me in a state of sadness/fear.

Ever since I got my crystal I have worn it and neglected to charge it. I now wonder if this is the reason for me waking up. Last night I charged it on my selenite and today the color is much better. I was amazed how last night it look yellow and today it is white and frosted.

I will see how I sleep tonight and I may try the selenite to get a good nights rest. Another thing I think I should mention is I have very strong connections to animals. I have been this way since I was a child.