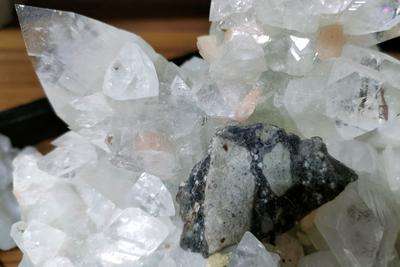 Lunar slice in an Apophylite druse 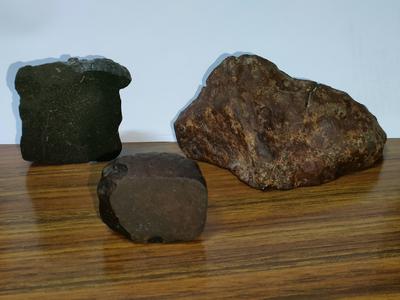 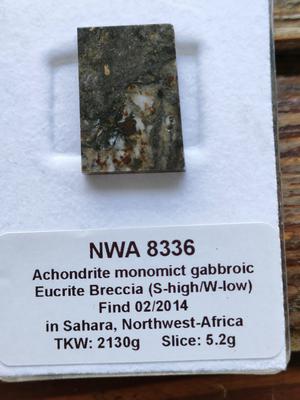 After experimenting with crystals for some years I wondered how would the vibration of a meteorite feel like, so I bought a plain looking 20 gr chondrite cut, costing about 20 EUR. I quickly got amazed at its strong vibration. I also realized it strongly increased the vibration of other crystals when held together with them.

This first experience made me start buying other chondrites like crazy, and afterwards other type of meteorites. Now I have a big collection of them. Some of them have quite a strong vibration and some of them I have never felt. With one of them I even felt a shifting vibration.

It started at a very high level and it went on decreasing its frequency till a very low, material close frequency, in a matter of a few seconds. This was a very strange sensation. I had never felt such a shifting vibration in a stone before. It was as if spirit was getting materialized.

My experience is that Chondrites have a kind of will of their own. The same sample may sometimes get strongly activated, while sometimes, no matter how much you concentrate on it, they do not let themselves be felt. I even think that there may even be beings that use them to express their vibration when they consider it convenient.

In fact I gifted some samples to a person I know, who is highly sensitive. At the beginning he was amazed at their high frequency and power, but then he perceived that one has to be careful with them because some undesirable astral beings were using them as a portal too, together with the high vibration ones, so he warned me to be careful.

Chondrites are meteorites with a very strong vibration and the most affordable ones. There are the ones that have special interest for collectors that can get very expensive, but the plain ones are quite cheap. One must be careful where one buys them because there are some scammer sellers.

Most sellers in ebay are serious but a few are scammers. My advice is that you buy to sellers that have a registration in the IMCA, the International Meteorite Collectors Association, but not all genuine sellers belong to it either.

Chondrites are asteroid pieces, as old as the Earth. Crystals on Earth are created and destroyed in a matter of millions of years, but Chondrites were created at the beginning of the Solar System and are as old as the Earth, about 4.5 billion years, and some of them have suffered very low alteration since then, so they are really old. Chondrites are relatively cheap and once you get familiar with them, easy to recognize, so scammers are not interested in them.

Other affordable meteorites are the metal ones, like the ones from Campo del Cielo. They also have a vibration of their own, very strong according to the sensitive person I mentioned but not so much according to me. The very interesting ones are the Muonionalusta ones, which have very nice crystallization patters. Be careful because there are some fakes metals on sale. Unless metals are analyzed in a lab it may be impossible to tell a real one from a fake one.

The most beautiful meteorites are probably Pallasites, made of extraterrestrial Olivine and metal. I have a few of them. They are really beautiful and are said to have a strong vibration, but I have not been able to tune with them so far. Be careful because here there are many fakes and also many genuine ones but too thin and fragile slices.

If we are able to spend more money we can try the Lunar ones. Their price starts at about $50 a gram, the same price as gold. They are scarce but having a piece of the Moon on your hand is worth the effort. There are some sellers in ebay selling nice slices. My experience is that most of the lunar slices have a very strong mental vibration. I feel them a bit like Apophyllite. You can see a photo of one of them in an Apophyllite druse.

There are also Martian meteorites on sale, but they are quite expensive. The most common ones are called Shergottites.

Eucrites are thought to come from the Asteroid Vesta. In the two of them that I have I also feel a strong mental vibration, like in the Lunar ones.

I did not manage to feel the vibration of Diogenites, and I do not understand why, because they are Olivine and in Earthly Olivine I feel a very nice vibration.

I hope this article is of help for someone. Thanks Liz for your great page that has motivated me a lot in my exploration of crystals.